Paul Solotshi Calder Le Roux, a 46-year old criminal mastermind, is the creator of encryption software E4M and TrueCrypt (the cryptography encryption software Satoshi Nakamoto likely used to lock up his 1 million BTC), and author of an uncannily similar manifesto to the one in Bitcoin’s whitepaper in 1998.

But that’s not all: Paul Solotshi Calder Le Roux employs similar spelling and language in his writing style to that of Satoshi.

He’s interested in gambling (Bitcoin’s initial code had a poker client included), and what’s more, he’s been in jail since 2012 – that’s probably the reason why his one million Bitcoin hasn’t moved.

On top of that, the documents included in this article show a connection of Craig Wright to Paul Solotshi.

Let’s start from the beginning:

The identity of Satoshi Nakamoto, the pseudonymous and enigmatic creator of Bitcoin (BTC) is perhaps the most enduring mysteries of modern times. It’s long been speculated as to who he, she, or they are, but to no avail — the long-standing mystery remains.

There have been a number of theories and candidates as to who Nakamoto really is, some of whom are even self-nominated like Craig Wright, the man known as Faketoshi for his bold claims.

Mr. Wright has courted controversy by claiming to be the creator of Bitcoin, which has led to multiple lawsuits and court hearings. One such court case, Kleiman v. Wright, has surfaced new evidence (in the form of a Wikipedia page which was not redacted), which, oddly enough, points to a new Satoshi candidate… and it’s not Wright.

“Le Roux is currently in US custody for ordering the assassinations of six people.”

Some readers may already be familiar with Le Roux’s life story, as it was presented in a series on Atavist along with a book titled “The Mastermind.”

An excerpt summarizing the publications states:

“He was a brilliant programmer and a vicious cartel boss, who became a prized U.S. government asset.”

Apart from Le Roux’s life as a cartel boss, he was also a brilliant programmer who created E4M, an open-source free Windows disk encryption software program, in 1999. As well, he is also suspected to be the creator of the open-source TrueCrypt disk cryptography package, which is based on E4M’s code.

How did a man of this nature, with an extensive criminal background and some impressive programming contributions under his belt, come to be tied to Craig Wright’s court case and suspected to be Satoshi Nakamoto?

Let’s delve into the evidence.

Self-proclaimed Satoshi Craig Wright is being sued by the Kleiman family on accusations that Wright defrauded and stole over $11 billion worth of BTC and hard drives from the now deceased Dave Kleiman, a noted computer forensics expert who’s suspected by some to be Satoshi Nakamoto.

Wright and Kleiman were business partners until Kleiman died in 2013.

The lawsuit that’s unfolding in Florida courts has been filled with bizarre theories, misdirections, forgeries, and mistruths which were often presented by the defendant, Dr. Wright.

Among the bizarre things brought forth by Wright is Document 187, “Dr. Craig Wright’s Motion For Protective Order.”

According to Wright, some of the evidence that supports he is Satoshi and that the $11 billion worth of bitcoins is his own, includes sensitive information about his ties to criminals and his involvement in their apprehension and incarceration.

Therefore, Document 187 has been redacted so that the criminals included in the document would not learn of Wright’s involvement with their arrests and seek repercussions against him.

However, unfortunately for Wright, whoever was redacting the document failed to to blackout one of the corresponding footnotes that identifies the criminal kingpin in question, Paul Le Roux.

Source: The unredacted footnote from document 187

As seen in the footnote above, a partial URL is visible that leads to a Daily Mail article that calls Le Roux a:

Also, the unredacted footnote clearly contains a link to Paul Le Roux’s Wikipedia page, indicating that Le Roux may very well be one of the criminals that Wright is afraid of repercussions from.

With the public release of Document 187, it’s now being suggested that Paul Le Roux may be Satoshi Nakamoto – and that Wright is in possession of encrypted hard drives containing Le Roux’s stash of the famously stationary 1 million bitcoins.

But how does Craig Wright, Dave Kleiman, and Paul Le Roux all fit into this perplexing conspiracy theory?

Per Document 187 and the unredacted information about Le Roux, there is a strong assumption that Le Roux is the unnamed individual that Mr. Wright talks about in the document.

Therefore, information outlaid in the document combined with some theorizing suggests that Wright was an employee of Le Roux, and also an informant who helped bring him down in 2012.

Following this presumed tail of events, one anonymous Redditor suggests that Wright and his long-time friend and business partner, Dave Kleiman, managed to get their hands on Le Roux’s encrypted hard drives that hold one million bitcoins.

However, unfortunately for Wright, all of Le Roux’s coins are locked away in secure TrueCrypt volumes (the cryptography encryption software suspected to be developed by Le Roux). Wright has spent years trying to crack these hard drives but with no success, which is why he has yet to prove he is indeed Satoshi.

Adding to the conspiracy theory, Wright’s close friend, Calvin Ayre, has set up warehouses of computers to try and crack the encrypted hard drives code, disguising them as a cryptocurrency mining farm. Meaning his mining activity is simply a front to make these massive data centers look legitimate.

Therefore, according to this bewildering yet entirely possible theory, the reason Wright is setting himself up as “the real Satoshi,” is so when he finally cracks the encrypted hard drives and gains access to the one million bitcoins, he can attempt to legitimately sell them off. 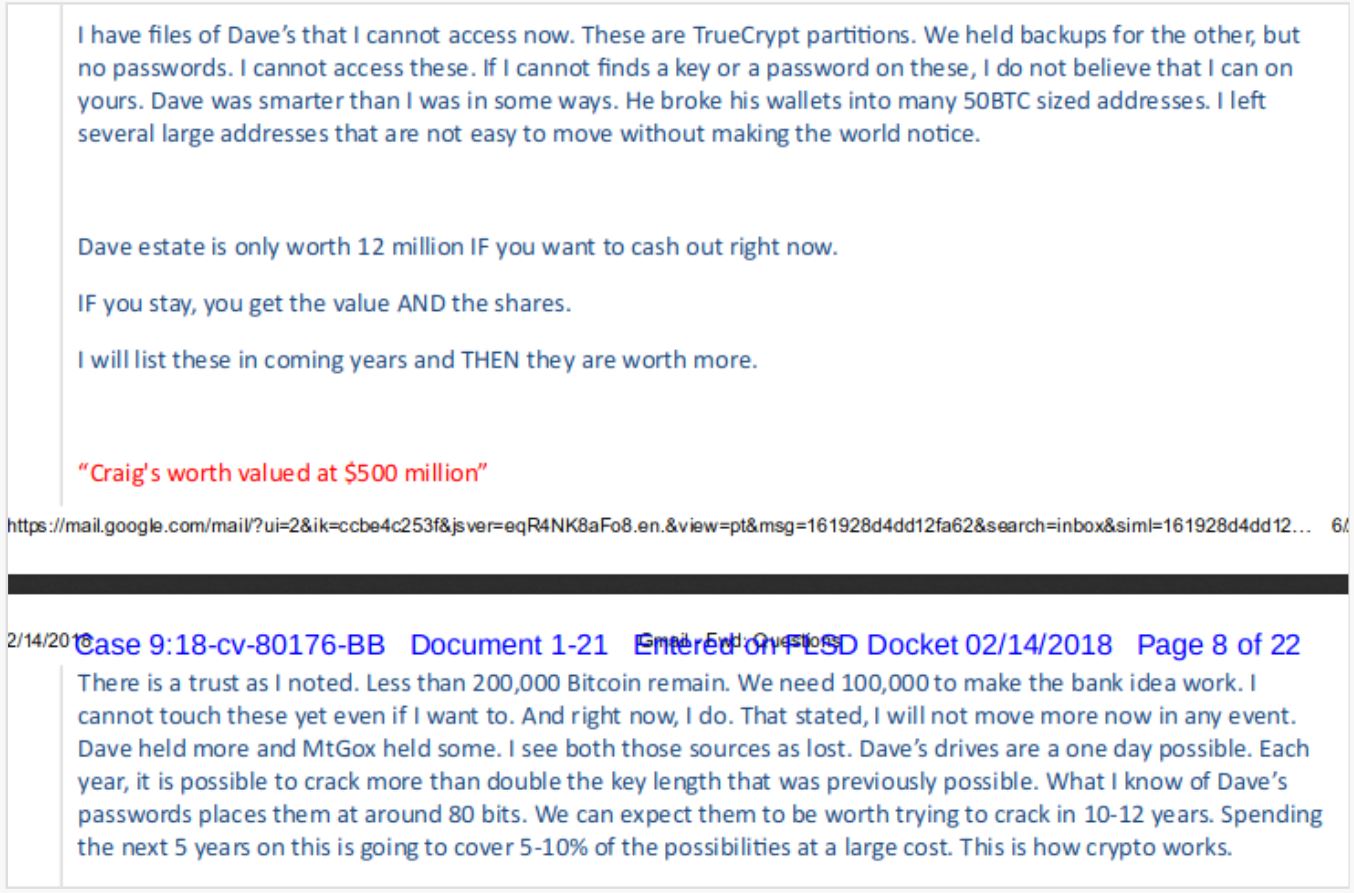 The image above is from a document in the Kleiman v Wright case and presents claims from Wright, where he states that he’s in possession of Kleiman’s TrueCrypt files that contain his stored Bitcoin.

According to Wright, it may be possible to crack the code within 5-10 years. All in all, it has been speculated that the TrueCrypt files Wright is in possession of are not Kleiman’s, but in fact Le Roux’s.

Upon closer inspection, there are many parallels between Paul Le Roux and what’s known about Satoshi Nakamoto.

Apart from the allegations of Wright’s association with Le Roux, there are numerous curious coincidences that support the case that the criminal mastermind Le Roux is Satoshi.

In one of the many passports Le Roux owned, he goes by the name “Solotshi”, which sounds extremely similar to Satoshi.

2. Le Roux is a brilliant programmer and familiar with C++, and so is Satoshi.

Before Le Roux was known to be involved in an array of criminal endeavors, he was a brilliant programmer with an obsession for cryptography and privacy, much like Satoshi Nakamoto.

As previously mentioned, in 1997 he began working on E4M (Encryption for the Masses), which is software capable of encrypting entire disks, with an option for plausible deniability (denying the existence of an encrypted volume).

Moreover, Le Roux published a kind of manifesto that expresses ideals strikingly similar to those of Satoshi Nakamoto.

As explained in Wikipedia:

“In the ‘Politics’ section of the E4M website, Le Roux published a kind of manifesto stating that governments are increasingly relying on electronic data gathering. Citing projects such as Echelon, linked to the five nation states which would become known as the ‘Five Eyes’ more than a decade later, he stated that encryption is the only way to preserve civil liberties.”

At the end of Le Roux’s manifesto, he states:

“Strong Encryption is the mechanism with which to combat these intrusions, preserve your rights, and guarantee your freedoms into the information age and beyond.”

Satoshi Nakamoto’s one million bitcoins are allegedly locked away in secure TrueCrypt volumes, encryption software that’s based on E4M’s code. Le Roux is highly suspected to have been a part of a team of anonymous developers called the “TrueCrypt Team.”

This suspicion is compelling because some of Le Roux’s former colleagues believed he had worked on it, but they couldn’t find any corroborating evidence, so it still remains a mystery.

All in all, if anyone could have hidden wallets containing one million BTC, it would have been the creator of disk encryption software TrueCrypt.

Satoshi disappeared in early 2011 to “move on to other things.” Around the same time, Le Roux transitioned from his field of software development to cartel boss. During this time, he experienced disruptions with his illegal global pharmaceutical business, RX Limited, when the US government and the DEA restricted distribution.

“Around 2011 Le Roux began to disappear for long periods of time, with none of his employees knowing his whereabouts. As U.S authorities were closing in on him, Le Roux took up temporary residence in Rio de Janeiro and planned his move there.”

5. A curious post from 2002 (7 years before Bitcoin was created), may have been written by Le Roux.

In a forum post from 2002, 7 years before Bitcoin was released, somebody posted something that sounds an awful lot like an early idea of Bitcoin:

It’s long been speculated that Satoshi himself wrote this post before actually creating Bitcoin, seven years later. Even more interesting, the IP address of the author has supposedly been traced to the Netherlands – a country where Le Roux is known to have once lived.

Despite all of the surface evidence that suggests Le Roux could be Satoshi Nakamoto, there are still reasons to believe this is not the case.

For example, in 2009 when Satoshi was refining Bitcoin, Le Roux was already establishing himself as a cartel boss, and is known to have been drug smuggling and gun running. How would Satoshi be able to do all of this while also starting a forum and answering noobs’ questions about Bitcoin?

Therefore, one could argue that Wright’s claim to an association with Le Roux are completely fabricated in an effort to show he was connected with the origins of Bitcoin.

After all, Wright doesn’t have the best reputation in the cryptocurrency space, and few, aside from Calvin Ayre, believe a word he says, including claims that he created Bitcoin and is Satoshi Nakamoto.

Therefore, everything Wright says must be rigorously fact-checked and treated with caution.

However, if Wright’s dubious connection with Le Roux is true, and “Solotshi” is, in fact, Satoshi, it would be one of the most incredible stories ever told, and Tarantino would already be jumping on the film rights.