But not everyone is on board. Following the example once set by Ethereum Classic, some users are continuing on the pre-hard fork Monero blockchain… though in this case not as a single project. Now there is  Monero Classic (XMC), Monero 0 (XMZ), Monero Original (XMO) and a second project by the name Monero Classic (XMC); these are all continuing on version 11 of the Monero protocol. Of course, this means they are all still compatible on a single network, using the same coin just with different names.

Here’s the story of the pre-hard fork Monero blockchain and the four different projects keeping it alive.

The latest hard fork also introduced a tweak to Monero’s CryptoNight proof-of-work hashing algorithm. This backwards-incompatible change makes all existing ASIC (application-specific integrated circuit) mining hardware useless. Such specialized hardware is a bigger concern on the CryptoNight hashing algorithm than most other hashing algorithms, as it could let ASIC miners launch denial-of-service (DoS) attacks on non-ASIC miners and non-mining nodes on the network.

The risks presented by ASIC-mining hardware appeared to be reason why at least most of Monero’s development and user community agreed on the change. However, not all parties were equally happy with the hard fork, presumably. Most notably, major hardware manufacturer Bitmain, as well as smaller manufacturers Halong Mining and PinIdea, recently all announced that they had developed ASIC machines for the CryptoNight hashing algorithm (and such hardware was probably used to mine on the Monero blockchain in secret). All this hardware would be rendered mostly worthless after Monero’s hard fork.

Over the past couple of days and weeks, four projects have announced that they will continue to use the pre-hard fork Monero protocol. Since all four are using the same protocol, they are  really all the same network and coin, albeit with different names and logos.

These are the four new projects continuing the pre-hard fork Monero blockchain. 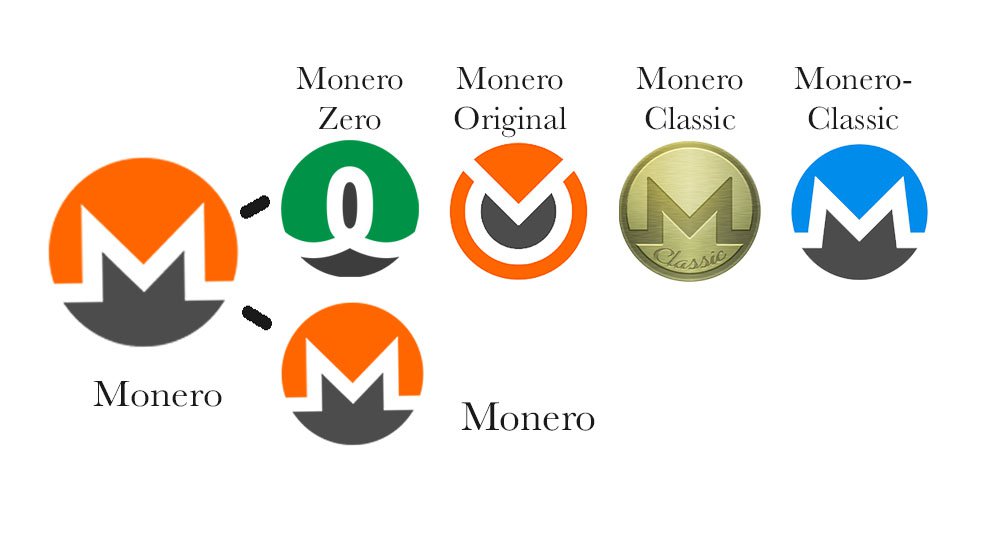 This first, Monero Classic, is initiated by a group that self-identifies as Monero enthusiasts from Singapore — including developers and “a few” miners — who felt it was “time to take action.” Representative Bento Tan explained that he believes that the development of ASICs is a market-driven process.

Bento Tan added that he considers this healthy market dynamic to be confirmed by the fact there are three different manufacturers to have created ASICs — not just one.

Further, hard-forking to make mining hardware obsolete is a considered a bigger risk than the risk of mining centralization. A statement on the Monero Classic website reads:

“The main message of Monero Classic is that we believe that the devs changing the proof of work creates more centralization and thus harms decentralization.” And: “The Monero developers are saying that they can change the consensus rules whenever it suits them and the community seems to be conditioned into following the wishes of the devs.”

Monero Classic has no connections with any of the other new Monero projects, Bento Tan claimed, and has no plans to cooperate with them.

On the website, the person behind Monero-Classic identifies himself as “PZ, an early Bitcoin evangelist and blockchain eco builder”.

Similar to Monero Classic, PZ explains on this website that “the emergence of specialized mining machine[s] for a cryptocurrency is [a] normal market economy phenomenon.” Additionally, PZ argues that “if there are professional mining machines, the events like ‘Monero was attacked by more than half a million botnets’ could be avoided,” referring to botnets that have been used to mine Monero.

Since the project seems to have originated from China, is actively promoted by Bitmain’s mining pool AntPool, and of course because Bitmain has much to gain from a continuation of Monero with the CryptoNight hash algorithm, some suspect that this ASIC hardware manufacturer has a hand in this project, too.

Not much is known about Monero Original nor the people behind it.

The project has a GitHub, and it sent press releases to several outlets. This press release did not contain much information, but it did include a statement from the “lead developer of Monero Original team”:

“Monero has always been about freedom of choice, about diversity and about the strong community behind it. We are providing the Monero fans [with] a possibility to support the iconic coin and stay on the original chain. Monero Original team stands for diversity, which is a logical marker of evolution. We are excited to see our favorite coin mature, and we are even more excited to help [in] keeping this diversity.”

At least one cryptocurrency exchange — HitBTC — indicated it would make XMO balances available to all XMR holders at the time of the hard fork. This does not necessarily mean that HitBTC will also offer XMO trading, but it does make it more likely they will.

Speaking with CBNN, a spokesperson for Monero 0 identified the group as one of “concerned users” some of whom operate hobby operations for mining.

“We’ve decided that the Monero Project’s strategy to continuously hard fork is no longer a stable strategy. We believe that Satoshi’s Proof of Work is the only mechanism for decentralized consensus. The so-called ‘network upgrades’ that are centrally mandated by the Monero Project are a “Trojan Horse” designed to compromise the effectiveness of Proof of Work in the Monero network. Monero 0 is not a fork; it is the original Monero.”

The Monero 0 spokesperson further stated that Monero is “an NVDA project”, that “‘proof of fork’ is not a consensus method,” and that “Bitmain is trying to destroy Monero”.

Assuming that at least one of the four new projects succeeds in keeping the pre-hard fork Monero blockchain running, this could lead to some complications.

For instance, the Monero hard fork did not implement replay protection. This could mean that users who spend XMR on the new Monero blockchain could unintentionally spend the equivalent coins on the pre-hard fork blockchain, and vice versa.

The default transactions they make will be considered invalid on the new Monero protocol but users of the new Monero blockchain do not have that same luck. If they want to keep their pre-hard fork coins, they should move these before they move their XMR, and do so with the default ring-size of five.

With time, replay attacks should become less likely, even for users that didn’t move their coins. This is because on Monero, mixing coins is a requirement, and the odds that users will mix their digital coins with digital coins that are only valid on one chain will increase. Doing so will make the whole transaction invalid on one of both chains.

A bigger problem is that moving coins on both blockchains independently reveals which coins are controlled by the same users. This is incompatible with Monero’s central value proposition of privacy and fungibility. Therefore, anyone who uses Monero for privacy reasons is best advised to completely choose one chain.

Even users that do not use both chains may suffer from decreased privacy. If they mix their coins with users who revealed which coins they own, it can reduce the anonymity set of the users that did not. This added risk is probably compensated for on the new Monero protocol by the increased ring-size for transactions, however.

2018-04-10
Previous Post: Hash-based Signatures: A Primer For All
Next Post: Brazil Has First Master’s Degree on Cryptocurrencies