Casper: What is it and How Will it Affect Ethereum?

If you’re no stranger to the world of cryptocurrencies, then odds are you’ve heard of the upcoming change to the Ethereum network (many times, possibly). Vitalik Buterin, the founder of Ethereum has been talking about a shift in the network for over a year now as he, Vlad Zamfir, and a team of devs are working constantly to improve upon the current system.

The future switch from a Proof-of-Work (PoW) to a Proof-of-Stake (PoS) consensus mechanism is easily one of the most  anticipated changes coming to Ethereum and as we’re getting closer, many cryptocurrency enthusiasts have questions about the change. We know most people involved in the crypto-sphere are not blockchain devs, so we will keep this simple, so that you can understand what Casper really is and how it will ultimately Ethereum.

First off, Casper is the name given to the upcoming update(s) to the Ethereum network.

There are actually two specific Casper projects that are coming together, but we’re focusing on Vitalik’s Casper, called Casper the Friendly Finality Gadget (FFG) since it’s the update that’s to be released first. This new update is a critical step in getting the network over from a PoW consensus mechanism to ultimately being a PoS system. In the case of “Vitalik’s Casper,” we’re looking at a combination of both protocols to have a hybrid PoW/PoS consensus mechanism. While both PoW and PoS are methods used to maintain security and achieve consensus for a blockchain-based network, there are some key differences between the two consensus mechanisms.

The first rollout is intended to be a hybrid between PoW and PoS before Ethereum makes the switch completely over to PoS. The intention is that this will make things easier for the network as the rest of the changes occur over time.  But why exactly does anyone want a PoS model anyway? After all, Bitcoin’s network has been running PoW since its inception and people are happy to continuously mine the cryptocurrency with the highest market cap. While that’s true, there are also some significant ways the Ethereum network can be improved and strengthened. Let’s take a quick look at the differences between the current system and how Casper plans to improve on it.

PoW is the original consensus algorithm used in a blockchain network dating back to the inception of Bitcoin and what the Ethereum network is currently using. The PoW model gained in popularity because of its ability to defend against distributed denial of service (DDoS) attacks and its ability to ensure that those with the largest wallets on the network were not the ones controlling the cryptocurrency. Instead, the network is distributed among a variety of miners in the network who are essentially solving puzzles (“mining”) and adding blocks to the blockchain that are verified by everyone else in the network.

However, as the cryptocurrency space continues to evolve the community is on the lookout for potential concerns in the future. While PoW doesn’t allow those with large wallets to control the network, it has been shown to shift towards becoming more centralized over time based on who has access to the greatest computational power. If we look at the makeup of those mining in the Bitcoin network, we see that large mining pools are collectively controlling a larger percentage of total hashrate in the network. 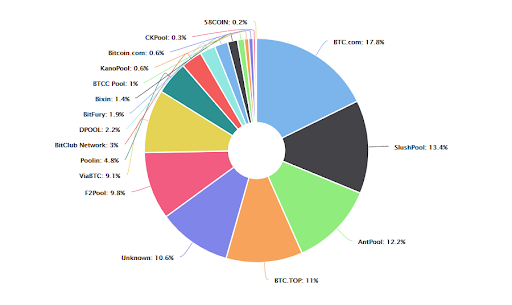 Above: Hashrate Distribution data from Blockchain.info

Though the largest mining groups in the network are mining pools, meaning they’re made up of miners from all over the globe mining together and not a truly single entity, there is still the possibility of a 51% attack on the network as groups continue to get a larger slice of the pie. With Ethereum, we see a similar picture as well.

Above: Ethereum Top 25 Miners by Blocks data from Etherscan.io

As mining becomes more difficult to stay competitive in, crypto miners are continuously needing to purchase more hardware and scale the size of their operations in order to remain profitable. In return, we’re also left with another important issue: energy consumption.

Mining cryptocurrencies with the PoW consensus mechanism requires a lot of computational power. If you’ve ever seen a BTC or Ethereum mining farm before, this is likely to come as no surprise. Mining operations often include countless GPUs and/or Application-Specific Integrated Circuits (ASIC) miners running constantly in order for the operators to make a profit. Not only is the cost of the hardware not cheap, but the electricity to run the operation is incredibly high as well.

Though that energy is well spent in the eyes of the Bitcoin and Ethereum networks, the fact of the matter is that mining consumes a huge amount of energy; unsustainable amounts, some might say. But those miners are serving an important role in the network as well.

Miners aren’t just getting paid for “mining” new coins, they’re ensuring the network is up to date and that all transactions are verified. Unfortunately, that power used for mining can’t be simultaneously utilized for anything else while mining. Because of the power consumption that is useless outside of the cryptocurrency context and the ever increasing concerns of centralization, Vitalik Buterin and Vlad Zamfir have been developing a solution for the Ethereum network known as Casper.

Looking at the current concerns in the Ethereum network, Casper presents an opportunity to move Ethereum in a new direction by bringing the network to a Proof-of-Stake (PoS) model. At the beginning, there will be some time where the first hybrid Casper (sometimes called “Vitalik’s Casper”) will be using PoS on top of the PoW network in order to ease the transition. However, the ultimate goal is to bring the Ethereum network away from PoW altogether and implement a PoS system. Why you ask? Because the switch intends to solve nearly all the issues above.

Unlike the current model for maintaining the validity and security of the Ethereum network, Casper is focusing on implementing a PoS system for the community. This key shift is looking to solve concerns of centralization, energy consumption, and economic security.

At the beginning, those running mining operations won’t need to close up shop just yet. Ethereum is still slated to be running on PoW for a while after the first Casper update, but it’s something miners need to keep an eye on. The biggest change coming to Ethereum is how “mining” is going to work. With PoS, there are no longer going to be any “miners.”

Rather, validators will stake ETH and begin validating blocks by placing a bet on a block that they think can be added to the chain. After the block gets approved and added, those who placed bets on it will be rewarded in proportion to their bets. However, a validator that attempts to place multiple bets on different blocks and effectively have “nothing at stake” will be penalized and have their stake slashed. That’s one of Casper’s significant characteristics that sets it apart from other PoS models and why it’s more Byzantine Fault Tolerant as a consensus mechanism.

After everything is said and done the biggest changes coming to the Ethereum network after the full implementation of Casper (both parts 1 and 2) are intended to be:

Of course, the cryptocurrency community won’t really know what’s going to happen to the Ethereum network until the actual roll out. Often times there is a lot of planning, testing, and optimizing that goes on before a mainnet launch, but then things get more complicated once the project goes live IRL. For now, all we know is what the intended outcomes are supposed to be, but we’ll have to wait for the actual Casper roll out to really know. Overall however they’re certainly certainly optimistic.